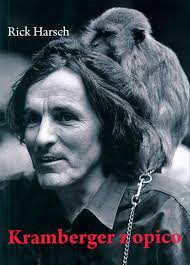 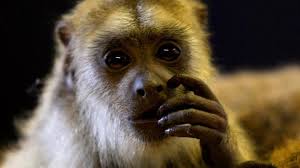 Where the hell was the monkey when Kramberger was assassinated? There’s the story I really wanted. But nobody knew. Nobody. The man was famous for traveling the country with his jalopy and his books and giving speeches with a monkey on his shoulder. And when he was assassinated the monkey was nowhere to be seen. When Kramberger was killed by a small bore bullet from a distance too great to make sense given all the details of the story, hence we conclude conspiracy, the monkey was absent. What, did he call in sick that day? Conspiracies are one thing, but it’s difficult to approach one from the point of view that a monkey was somehow involved, that maybe the victim’s own monkey was complicit, that at the very least the monkey ‘let it happen’. And so, not given to allowing a preponderance of the absurd in such investigations—let’s say a Latin American ruler spouting off against American interests is handed a tape recorder just before boarding a flight that subsequently blows up, killing all on board: we, not being an actual court of law and thus having less stringent burdens of proof and therefore more effectively arrive at the truth, conclude he was handed a bomb–in fact basing much of our conclusions on the refusal to give the absurd more than its due, we are forced to accept a degree of chance, or, if you like, coincidence. And that puts us flat on the continuum that leads all the way to the official version that a drunken hunter got off a freak shot that just happened to puncture Kramberger’s chest with the precision of a sniper shot rather than zinging off a railing somewhere or chipping a wooden roof slat. It therefore seems incumbent upon me to investigate the circumstances of the missing monkey. Maybe I will only eliminate a possibility; maybe the monkey was up in Graz undergoing dialysis.