This Review Is Not For Amazon 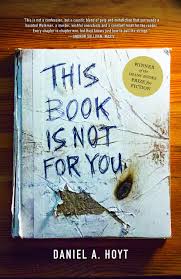 Dan Hoyt’s This Book Is Not For You

It’s time to stop talking about fiction categorically, time to shut the fuck up about metafiction, postmodernism, experimentalism. It’s time to remember Rabelais and Petronius, Burton, Arlt and that other guy (women? I suspect they are in the vanguard—I wish I could experience the genderrific thrill of having a lady named George enter the man’s world just to show them how easy it can be if you take your genitalia just a little less seriously). The history of fiction is a very long one, a history of free prose winnowed suddenly into a conformism commodified into an embarrassing self-regard—mirrors previously used to perform tricks became instruments of judgment. How it happened is not my concern, other than to say it took a great deal of cowardice, collaboration—in the shave their heads sort of way—and competition. Okay, yes, I AM disgruntled, but as things stand I am far happier that I am me and not Dan Brown, not Frank Conroy. I’m glad I’m not Dan Hoyt, too, but that’s because we never enjoy our own books the way we delight in the inspired works of others. And Hoyt is inspired, red hot, boiling—he’s a mad phalanx of lobsters with felt-once tip claws; and I’m going to let other reviews discuss his innovative moves—I’m going to tell you that I can’t remember the last time I came across so many memorable lines with such frequency, especially from a young first person narrator. It’s not only the descriptions, but the wisecracks, the attitude, the violently ambivalent truths of a man in the contracting idiocy of his time. Hoyt’s Neptune is an amazing literary creature, a narrative drive unto himself. And this is where I recall an obscure writer like Desani and his mad Hatterr and slide him into the review like an asshole, but I wouldn’t do that to Hoyt. I would do it to you, but not Dan Hoyt. The very notion is absurd—we need to shut the fuck up about other writers when we’re reviewing the current victim (every review is a violence done to the work of the author, every review). This may seem odd, but it is even about time we review the photos authors let their puppeteers attach to their books: and I’m damn glad a bald Hoyt with sleeves rolled up is looking at me, telling me he absolutely does not care what I think of his book. No sweater. No dog. No living room floor. Back to the book, the word choice is unparalleled, deft, but that goes without saying—if it wasn’t deft I wouldn’t be reviewing because I leave the reviewing of shitty books to others; no the word choice is consistently inspired: ‘burlap crackers’! See if you can top that. See if Joyce Carol Franzen can top that. It’s a work of literature and it has a plot, too, and you actually read it as fast as the narrator tells you to, tells you are, and unless you’re an asshole you will take your first origami lesson. As for the content of the book, I mean otherwise—the cover is great but for the five blurbs, all of which are right in praising the book, all of which fall short of sufficient praise, and each of which has at least one remarkable idiotic aspect (Listen to this shit: ‘A page-turner experimental novel.’ I would rip the head off anyone I caught putting that on my novel.)—the content of the book doesn’t matter in the least because the narrator is the book and it wouldn’t matter what he was going on about in his way. I probably should tip one of my Midwestern hats to Dan Hoyt, a lesser Pacino, phelt you can afford: the environment of his novel is up to date and survives, the characters what has been done to them, wires and everything…
Maybe one reason I like this book so much is that the narrator directly tells the reader a lot of what I think, but that passes because I have to get on with what I am writing—I like directly telling readers uncomfortable things and I don’t get to do it often enough. This book revels in it. I have spent far too much time writing for the one or two or three people who pop into mind as I write—P will like this, B will laugh at this, T will get this. The fact is, however, that we could not possibly have the detrital bloat of commodified cornholery that passes for literature without a plethora of morons not getting our books, not caring to get books, not advancing their selves through art, surrendering their selves lest art, merely paying lip service to art without even swallowing. Which brings me to my only problem with the book, not an uncomfortable one for me. I love great literature, and I read a lot of it, and I’m damn grateful for the current writers of it…But this is the first time I’ve ever read a book and felt that it might change my writing in some way in the future. It has an urgency that may finally lead to a necessary coherence in literature given the world that Arlt described is in its late menopausal stage. I might have to learn from Hoyt to maintain my relevance to myself. I might have to speed up to keep the urgency in sight.