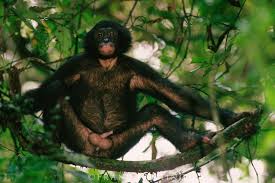 Slovenia, which had the largest collection of bonobo monkeys in Europe until now was unprepared for the mass breakout from the Ljubljana and Škofija Loka zoos last night after the results of the gay marriage referendum came in at nearly 2 to 1 against, with over 60% of the population abstaining. The tollway was closed from 11 pm until 5 am as the 1000 plus apes gathered near Logatec for the group romp toward the border fence at Dragonja, which they scaled like so many wily Syrians. Although Croatian authorities had been alerted, they were unprepared to deal with the number, strength and diversionary strategies of these smartest and most sexually active of simians. A spokesman from Škofija Loka, the only man in Slovenia who speaks bonobo, said plans for an escape had been in the works for some time, as these omnisexual beasts feared that the logical next step was to prevent g-g rubbing (two female apes rubbing genitalia, a favorite bonobo practice, for females) in front of children, who, a bonobo spokesman pointed out, were never invited by them to watch. ‘When they brought us here they just said act natural, so we have been.’ Another bonobo practice that has had the church up in arms is that of greeting each other by fornicating. ‘What better way to say hello,’ the spokesape said, and the translator concurred. ‘When a bonobo says hello, you can be sure it’s sincere.’

One human gay couple, who wished to remain anonymous, were interviewed and expressed concern that two more places where gay people were welcome in Slovenia would now be shut down. ‘And now that the translator has been arrested on suspicion of bestiality, who knows what’s next?’

Officer Loyze Škrobnik of the highway patrol said that the apes were remarkable orderly, with few exceptions. ‘It struck me as a sort of planned panic. Most of them stuck to the center line and southbound, but groups of up to fifty or more were on the wrong side, many having been confused by the Postojna ‘crossroads’. ‘Anyway, from what I was told, they frequently tend to cross over.’ Few cars were damaged and no humans injured. But it was necessary to close the highway.

These shit tossers, beloved of children, the third greatest tourist attraction in Slovenia after Lake Bled and the killing squares of Celje, are unlikely to be persuaded to return. ‘Every last one is gone,’ the translator said, arms behind his back, handcuffed. ‘I was told that such a referendum in the past has always led to a resurgence of so-called family and church values, and even though Slovenes are called Catholic despite the fact that fewer than 10% actually follow Catholic practices, they were taking no chances.’ Some had been captured in Uganda, many volunteering to travel to what they thought was a free country.

Only a dozen of the apes is in custody in Croatia, at a holding pen in Pazin. They were caught in pairs, having stopped to fornicate or g-g rub (eight females and four males, according to our sources).

Church officials responded with a shrug. ‘Good riddance to bad rubbing. Now maybe our young people will keep their hands out of their pants until the church has had time to instil appropriate manners into them. That is, after marriage, and by marriage we mean one male and one female, unpregnant. If necessary, we will have representatives of the Bishopric of Salzburg come down here to straighten people out.’

Croatian and Slovene authorities working together have asked the public to keep an eye out for these ringleaders:

Can you get this monkey’s message? 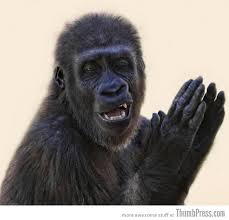 What about this one? What is the polar bear conveying?

If you get even one of these wrong, chances are you have been emoticonned.

More on this phenomenon soon.

Notes on the Misuse of the Word ‘Obscure’

Last night Operation Palm was an unmitigated success. On the public islands of greenery between sidewalk and street in front of my apartment there are tall fan palms that drop seeds to the ground and several hardy specimens shoot up a leaf or two before the communal trimmers come and stomp them in service of rose plants and lavender scrub. Occasionally one is positioned to survives longer, long enough to grow a tiny trunk and shoot out a trifecta leaf or two, fans like in the name. It was one of those we were after. We: I cajoled my son into taking part. It was a two man job. Two men and two dogs. I needed to look as if I had stepped into the green space with purpose, as if following my dog to clean up his dreck. My son hanging back with the other dog would also distract attention. I found the palm and with a small spade successfully extracted it from the earth, bulb and most roots intact. Back inside I planted it. The palm is stout, tall as a midget’s knee, with five shoots, two trifectas.

This morning I noticed that it seemed to have rotated in the night—I had planted a stick near it to mark its growth, but I didn’t count on it rotating. Naturally I felt that it was mocking me in some obscure way. It is mocking me in some obscure way, I thought to myself several times before an upwelling of a profound need for clarity urged me to think the matter through. Yes, I still felt it was mocking me, but why do I need to call it’s manner obscure. Sure, it is obscure to me. But that in no way describes the intentions of the plant, or the fact of it having rotated. There is another plant in the same pot: I assured myself that that plant had not rotated. But what did that tell me? Only that I was using the word obscure as a defensive measure, so that I could lay the entire incident aside with minimal discomfiture.

Riding, wobbly, yet in full confidence of ultimate balance, this cresting wave of intellectual honesty, I sought a metaphor. I once engaged in fencing, I can say immodestly that I was no slouch, losing only to Viking marauders with no technique. Obscure…it is like a fencer building a brick wall between him and his opponent as a defense and calling the unseen feints and lunges obscure. Naturally I have no means of communicating with the plant world—perhaps some day—but that hardly makes the behavior, the feelings, the betrayals of its creatures obscure.

These notes taken I returned to the plant and sat beside it, remaining still, observing. The session did not last long. The plant had rotated sometime overnight; so far today, it has remained still, but for that oft undetectable trembling that I detected, that accounts for my obscure discomfort, which sent me scurtling back here where I feel if not safe, perhaps it is best said ‘safe for now,’ surrounded by my knowns.

1.Which of these cities is not in Uzbekistan?

15.Which of these cities is not on the Black Sea?

6.Which two countries are Nordic countries but not Scandinavian countries?

3.Which country is a Fennoscandian country but not a Nordic country?

2.What are their capitals?