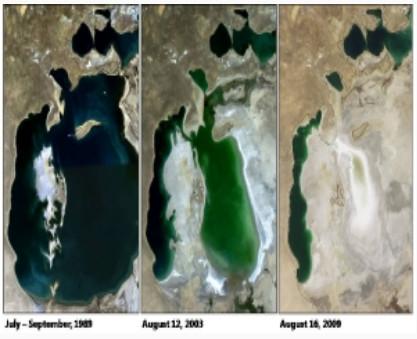 About half of that sea is ‘in’ Uzbekistan, which gets the worst of the health hazards, as toxic dust from the former seabed mostly flies south to the province of Karakalpakstan.

The story of the Aral is rather simple. It was fed by the Syr Darya and the Amu Darya, both of which were siphoned from for irrigation extensively during the Soviet era, so that eventually no water at all from either river fed the sea. The balance of the Aral was precarious enough, fed rather weakly, evaporating at roughly the rate it was fed. But it was a great place for sturgeon and a number of other interesting sea creatures.

Soon we shall sea how a tourism functionary makes the best of this rather sad, seemingly uninviting region.

My curiosity incited by correspondence with the aforementioned Arslan Levantinov, he middling bureaucrat detained by fate in a country that boils its citizens alive at the same time he has a particular fear of being burnt that stems from a childhood accident at a stove, I thought I might start by checking Wikileaks–I know. it’s hard to take an organization with such a Lewis Carrolesque title seriously, yet what follows is a genuine document regarding tortures that include those Mr. Levantinov most fears:

(As will virtually all to do with Uzbekistan, comedy persists, here commencing with ‘The report includes recommendations to the government of Uzbekistan to end
torture, and urges the Uzbek government to:’

We must assume many a belly laugh at this point among the official readers of the document, imagining the fox baby-sitting the hen house instructed to be sure lights out and quiet by 7:30 p.m.)

Uzbekistan’s record is coming up for scrutiny before the United Nations
Committee Against Torture (CAT) on November 9, 2007. November also marks
the five-year anniversary of the visit to Uzbekistan by the UN Special
Rapporteur on torture, who concluded that torture in Uzbekistan was
“systematic.”

The 90-page report, “Nowhere to Turn: Torture and Ill-Treatment in
Uzbekistan,” documents widespread torture that goes largely unpunished.
The report finds that torture and ill-treatment are ignored and overlooked
by investigators, prosecutors, and judges, and generally hushed up by the
media and the government.

The report details the cycle of abuse that starts at the time of an
individual’s detention and continues through conviction or beyond to
compel confessions or other testimony. In cases documented by Human Rights
Watch, police agents manipulated and prevented detainees from having
access to counsel of their choice. They beat, kicked and threatened
detainees soon after they were first detained, when detainees are cut off
from access to third parties or avenues where they might seek redress.

Police and security agents abuse detainees and threaten witnesses,
detainees’ families, and sometimes even lawyers to deter them from
pursuing accountability.

“This is no marginal problem,” said Cartner. “The Committee Against
Torture needs to recognize that ill-treatment in Uzbekistan is endemic to
the criminal justice system and not just a problem caused by a handful of
rogues.”

While the Uzbek government has given examples of police held accountable
for torture, no one was held accountable in the cases documented by Human
Rights Watch. Judges did not investigate torture allegations that criminal
defendants made in court testimony, and instead alleged that the
defendants were lying or told them they should have filed a complaint
during the investigation. A 39-year old defendant in one of the trials
monitored by Human Rights Watch explained why he could not do this: “I
never had a confidential meeting with a lawyer. I know that the pressure
would have increased if I had complained. I am a human being. I am not
made of iron. Even animals scream when you beat them. I was scared. That
is why I did not complain.”

Common methods of torture and ill-treatment include beatings with
truncheons and bottles filled with water, electric shock, asphyxiation
with plastic bags and gas masks, sexual humiliation, and threats of
physical harm to relatives.

The report includes recommendations to the government of Uzbekistan to end
torture, and urges the Uzbek government to:

. Take immediate and concrete steps to comply with its obligations
under the Convention against Torture and other Cruel, Inhuman or Degrading
Treatment or Punishment;

. Implement in full the February 2003 recommendations issued by the
UN Special Rapporteur on torture following his visit to Uzbekistan;

. Publicly acknowledge the scale of torture in Uzbekistan;

. Conduct a robust, nationwide investigation into the practice of
ill-treatment and torture;

. Declare what measures it will be taking to ensure the prohibition
on torture and other ill-treatment is fully enforced and respected in
practice;

. Make this information available and accessible to the local
population, through the media and other appropriate forums;

. Ensure that detainees are informed of their rights, that they have
access to confidential meetings with a lawyer of choice, and can
communicate unimpeded with their lawyer at trial; and,

. Hold perpetrators of torture and ill treatment accountable to the
full extent of the law and ensure that detainees can make complaints about
torture without fearing retribution.

The report also calls on the Committee Against Torture to make full use of
the opportunity provided by its review to express concern about the
continuing widespread use of torture in Uzbekistan, and to call on the
authorities at the highest level to publicly condemn the use of torture.
The committee should also emphasize the crucial role played by civil
society groups, independent media and international organizations in
efforts to combat torture and ill-treatment, and call on the government to
ensure that these actors are able to function freely and effectively in
Uzbekistan.

Human Rights Watch also called on the international community to support
the work of the UN’s anti-torture bodies by advancing the implementation
of their recommendations as part of their relations with the Uzbek
government.

“International actors should take a principled stance and make ending the
use of torture a key component of any dialogue with the government of
Uzbekistan,” said Cartner.

For audio testimony by Uzbek citizens who were tortured in detention (with
English translation and voicing), please visit:

In English we would call you Ivan Trinko Street

But you deserve better.

We don’t want people asking us who you were, Mr. Trinko,

For even though you were a Roman Catholic priest, A poet, a writer, a philosopher, a translator, a

linguist, a critic, a composer–

Not to mention a painter–

When I asked a poet about you she said

Maybe you did too much.

Let us look at the benighted beginning of your street:

I made the picture small as if I were your grandchild

And I loved you

Because where a triangle of freedom opened up on Gregorčičeva

Where you were interesting

Going two directions at once

Perhaps a poet flank past that little round sign

Where you had your opportunity they put a garbage kennel

Unless you need to stop first to dump your garbage

Or hop on your motorcycle and come back up.

As you know, translators go both ways

And critics sometimes have to escape in haste

You might need to zip up to the church that is so near, just one short street behind the camera man

You never were a camera man, yet, still, Ivan, you deserved better.

Is evident in the photo to my right

Exuding all the charm inherent in an old

Look how the building itself stumbles down

But is there an uglier building in the old town than that drek brown stump before you?

No: wait! Have you tricked me, philosopher-poet?

To make up for what is lacking in your own?

No, Ivan, you have no side street, you merely descend

You would have us pick up speed, only to zig, to zag, pick up more speed

And then run smack into a wall! 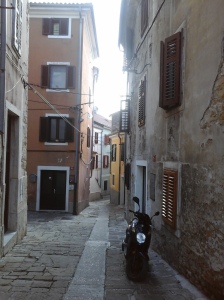 I suppose it’s not unusual for people to be trapped in a context that keeps them in perpetual proximity to the realization of their fears, so let us not ‘grieve’ prematurely over the continuing (after all) life of, yes, here I can name him, Arslan Levantinov, who as a young child burned his hand on a stove in a fit of arch curiosity–it was the arching belly of the black coal burning stove that invited him to curl his hand in the most natural way and press the source of the intoxicating heat. This in itself is nothing until I add that this happened in Tashkent, in Uzbekistan, his home country, where he works for a government tourist agency, a minor functionary–in Uzbekistan, beloved of successive US governments for its peace and geologic fortunes, perhaps most of all for its endorheics (never mind that for now, as there is much to say about it and I will get to it later, as will Mr. Levantinov in one of his letters, which include a joke of the type I really like, in which the reader is invited to contemplate rather be snared by a punch-line [“What is endorhea?” he asks. “The combination of violent diarrhea with implacable constipation” {for now, my phrasing}])…In Uzbekistan; and no country, of course, is without its struggles, just as no country is without the native soups of their cuisines–here is the ugly payoff: in Uzbekistan, people are taken from the streets and put into large pots and boiled alive.

Our Arslan Levantinov, encavmaphobic (there should really be no name for a universal fear, but for Arslan the fear is apparently more agitating than for most), lives in fear of making some kind of error on his own part, or of some kind of mistake being made by the authorities, or fear of the authorities–here I think we nail the entire phenomenon well down–for no traceable reason putting a hood over his head (there are many names for this phobia; I think fear of fog, though, is most poetic and most accurate–homichlophobia [one hears a by now ancient German cry of terror: “Nein! Nein! Nicht der Nebel!” for what is need of night in such a fog?])–and, well, in need here of some quaint, using him as the first ingredient in a pot of the national soup.