James Joyce was an Irishman, there’s no getting around it, but his comfort in Trieste as well as his love for drink and song and multilingualism suggest he was more Istrian than Irishman in spirit. If you don’t believe me, read The Years of Bloom: James Joyce in Trieste, or go to Trieste and count the plaques and statues regarding Joyce. Right there on the Canale Rosso he is captured in stride; in the giardino pubblico his bust is expertly presented—near to Italo Svevo’s, Svevo, the Triestine writer Joyce made famous, and whose bust has been stolen three times while Joyce’s, one would think in reverence, has been left alone. Oh people from around the world descend on Trieste to soak in Joyceana, to drink where Jimmy drank, to, well, try to see the city Jimmy saw. But they don’t see it, not there, not in a Trieste denuded of multifarious splenetic life by the loss of its hinterland since Jimmy left.

Ah, but there is a place for them to go to find what Jimmy saw when Jimmy was there. I remember a book event I held in Piran on the punta some three years ago that went on all night, precisely what Joyce would have experienced in the same Piran a hundred years ago. And, lo and behold, we know that Joyce WAS there, he was in Piran in 1910, and he did stay all night, he got drunk and slept on the marlstone, yes, we know this for a fact because his life is well documented—and this particular night was especially significant because Jimmy awoke with an eye infection that never ceased bothering him, that eventually led to his famous blindness, that gave him the famous patch over his eye. Yes, Joyce likely took the Parenzana up and down the coast numerous times, one time too many, one time to his misfortune. There is no doubt that he drank great wine, that part of his night must have been swell, there is no doubt he sang before he passed out—he had quite a tenor—but he did pass out and he did awaken with an eye infection in 1910. And nothing in Piran marks this event. The best writer in the world in the 20th century suffered a seminal difficulty in Piran, visited Piran, in 1910 and the town does not recognize this event.

This is an astonishing lack of imagination or energy, I don’t know which. I alerted the vice mayor 12 years ago and wrote in Primorske novice about the event 12 years ago. If Piran were to build a simple statue of a drunken Joyce somewhere in Piran, hundreds if not thousands of literary pilgrims would visit every year, many of them hard drinkers, most of them big spenders. Conferences could be held. Money would be made. Most importantly, a significant event in Joyce’s life would be on the map. This is your last chance, Piran. If you do nothing, we build the statue in Izola and attach an arrow pointing to Piran. 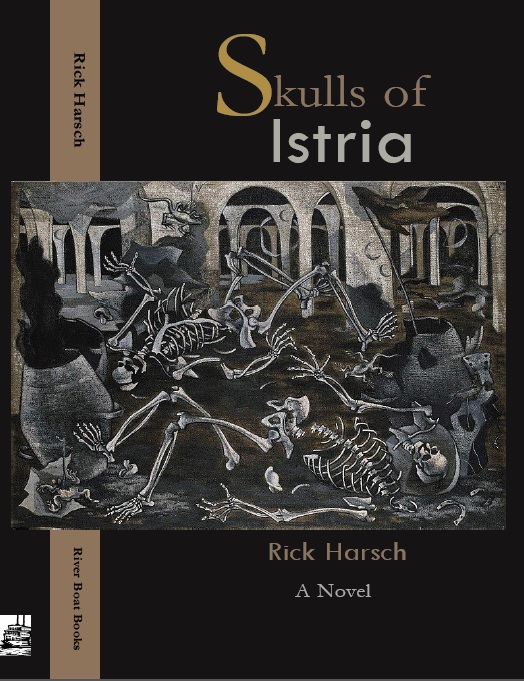 “Skulls of Istria” is the spoken account of a disgraced historian in search of redemption, which comes to mean, in any sense that matters to him, an appropriate subject.  He tells an uncomprehending drinking companion (the companion doesn’t speak the language, but drinks are free) how he stole his deceased mentor’s work, improved it, and passed it off as his own, to his financial gain but ultimate humiliation when the plagiarism is detected.  A fugitive from the law and the bloodhounds of academic and publishing standards, the narrator escapes with his lover Rosa to Venice, a city that he loathes for its opportunistic role in history, and from there to the Istrian peninsula where he stumbles upon his subject:  one Giordano Viezzoli from Piran.  Viezzoli fought with the International Brigades in the Spanish Civil War.  “So this man, this 26 year old man, had left his home, gone directly to Spain and almost immediately been killed.”  He would use the meaninglessness of this young man’s sacrifice on principle to an anti-fascist cause, his freedom to choose, as an arrow “aimed straight into the skull of the Fascists.”  He sees Viezzoli’s “commitment against powerful forces” as “enough to bring down the moral scaffolding upholding Western Civilization” depriving “Western empires of their right to govern.”  In the course of doing footwork research, the narrator literally falls into the underworld.  He meets the dead, skeletal remains in a mass burial site, presumed by him to be Uskok victims of Venetian reprisals in the 17th century.  Despite a strong identification with death, world- and history-weary, hunger drives him back to the world of the living where he learns that an act of charity on behalf of a new lover’s “brother” has allowed this man, whose real identity he subsequently learns is that of a war criminal hunted by Interpol, to elude capture.  His principles betrayed, having ignorantly aided The Enemy, his rage turns back on himself.

For someone whose passion is for the truth, or for a fidelity to truth, which might not be the same thing, the narrator has a checkered past, given his propensity for the theft of intellectual property.  But now he is nothing if not unsparing in his judgment of himself, his fellow students and historians, the empires that have laid waste their conquered provinces, preyed on, betrayed decency, fair and honest interchanges since the historians first sang their accounts of what they’d witnessed or heard.  He has always been not merely suspicious of romantic love but actually contemptuous of it while enjoying the benefits that accrue to him from indulgent Rosa who supports him through the lean years that run into decades and then flees the country with him in his disgrace.

Stripped of nearly all illusions by his close reading of history and observation of his fellows, the narrator spares no one his clear-eyed assessment.  Clear-eyed, yes, except that he allows his passion for “gypsy” lover Maja finally, fatally to cloud his vision.  He doesn’t see what’s coming.  What’s that about knowing history so that you won’t repeat it?  He is being used and betrayed for his resources as surely as any of the empires he loathes betray and steal from whom they will.  Though he has “witnessed” indecency (mild term) countless times in reading history, in reading newspapers, none of that prepares him to encounter something similar on a personal level.  He is a man of thought, not action, as he admits, and when given the opportunity to act, he makes all the wrong choices.  He does not know with whom or what he is dealing.

“Skulls of Istria” is a tour de force of compact rage that is brilliant in every sentence, in every description and nuance of character and movement.  Everything is noticed, and everything means something beyond what it appears to mean.  Whom can he trust in this volatile region of the world?  Everyone plays his or her cards close to the chest.  This novel contains some of the wittiest and most incisive observations of human behavior and human foibles one is likely to find between the covers of a book.  The author is a playful linguist but rarely allows his playfulness to become an end in itself.  Harsch masterfully describes thought life as beautifully and clearly as he does lived life, to the extent that I found myself reading slower and slower and marking sentence after sentence that leapt out at me for sheer rightness and poetry.  No one describes a landscape, topography and the difficulty of traversing it better than Harsch.  No one can write a funnier sex scene than Harsch.  It should give one pause to be able to say, these days, that he or she has run across an original sex scene, given the overabundance of the same in daily life.  But search these pages for just that.

I cannot recommend this book highly enough.  It is short but profound, angry but funny, truthful as only the fallen one can speak the truth.